Prior to 1848, the junction of the Touchet River and Patit Creek was known as the “Crossing” as Dayton was the summer meeting of various tribes.  Included were the Nez Perce to the east, Palouse to the north, Yakamas to the west and Umatillas, Walla Walla and Cayuses to the south.  They gambled on pony races and played stick games where the City of Dayton is now and the trail continued almost down Main Street to the Tucannon River in the east.

On November 29th, 1847 the Whitman Massacre occurred by the Cayuse Indians and the Cayuse War began.   On March 12th, 1848 Colonel Cornelius Gilliam was camped with his Oregon Volunteers on the Tucannon River at the Nez Perce Trail crossing. Upon receiving word some of the Cayuse Indians responsible for the Whitman Massacre were at the mouth of the Tucannon River.  He marched his troops all night and upon arrival the next morning he was told the Indians had forded and crossed the Snake River but had left their livestock.  On March 14th, 1848 Col. Gilliam then gathered up the livestock (Cayuse or Palouse had left) and started back to the crossing of the Touchet River at Dayton.  After marching only a very short distance his troops were attacked by about 300 to 500 Palouse warriors left behind by the Cayuse.  The Indian attack was staved off initially but a running battle ensued and continued until the Col. Gilliam and his men made camp that night on a small creek (Patit Creek) without having reached the Touchet River.  The Palouse warriors fired into the camp all night and the Volunteers decided to release the horses to mollify the Indians but it was not successful. Next mo 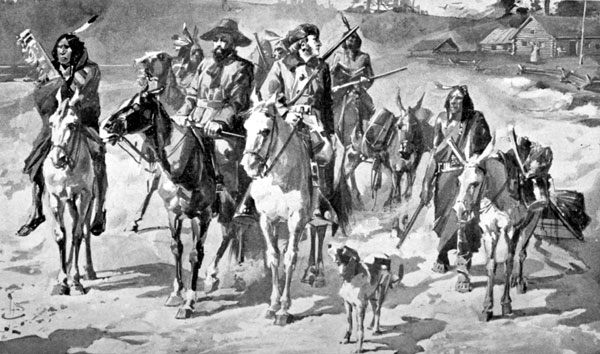 rning the Col. Gilliam and the Volunteers continued the retreat to the Touchet River.  The Palouse realizing the goal set up battle lines in the underbrush and scrub of the river bottom. In the afternoon the desperate battle was on and lasted between one and three hours until Col. Gilliam and Volunteers fought their way across the Touchet River at which time the   Palouse withdrew. There were reportedly 10 injuries and 1 death according to accounts and a number of Indian dead.  On March 16th Col. Gilliam and his men reached Fort Waters about 30 miles away having had nothing to eat for 3 days.  This marked the end of the Cayuse War as the warriors involved dispersed among other tribes and eventually were all caught and hanged by 1850 in Oregon City.

In 1855, Kamaiakun, a Yakima Chief had defeated Gen. Steptoe in the north and Indians were emboldened in the area.  Walla Walla tribal Chief Peu-peu-mox-mox decided not to honor their treaty as well upon the death of his son by whites.  Major Indian battles in the north had settled the Yakama issue and late in 1855 the Battle of Walla Walla occurred effectively ending the major uprising but tensions still remained.  Another skirmish happened in Dayton at the “Crossing” on July 13, 1858 when W. J. Lindsay in charge of 13 packers escorted by Lt. Wickliff of Company F, 9th Infantry camped on the south bank of the Touchet River opposite Patit Creek. About 70 Indians came down from the hill on the north and circled the packers and soldiers.  The first circle around the camp left 2 white men dead and 3 wounded.  Led by Lindsay the men waded the Touchet River above the mouth of Patit Creek and ran upstream as the Patit Creek afforded the cover under a high bank and waited for the next charge. The Indians made several more charges but eventually withdrew.  At the end of the skirmish there were 11 dead Indians and 13 dead ponies between the creek and the foot of the hill.