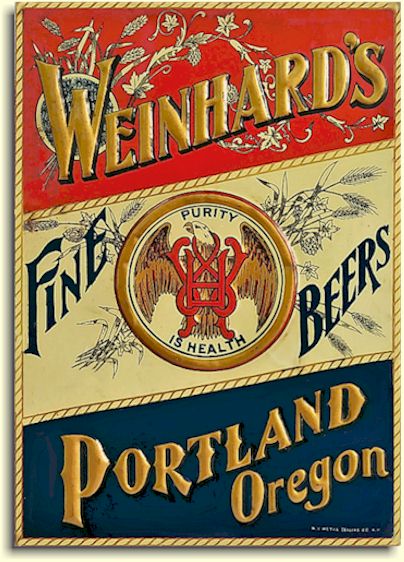 Jacob Weinhard was born in Stuttgart, Wurtemburg, Germany in 1849.  After serving four years as an apprentice in the brewing trade, he came to the United States in October, 1872.  His first destination was Portland where he was employed as foreman at the brewery belonging to his uncle, creating a brand and beer known as Henry Weinhard's.  In the fall of 1880 he started for Spokane after hearing of the opportunities in the Washington Territories.  Delayed in Dayton by a snow storm, he heard of a business opportunity and decided to stay.

Brewing and Thriving in Dayton

Jacob Weinhard became a partner in a brewery soon after his arrival to Dayton. Shortly thereafter he became the sole owner of the Jacob Weinhard Brewery.  Because of his need for great quantities of barley, he was instrumental in the conversion of wheat to barley agriculture in Columbia County.  In the areas of architecture and commerce he had a major influence on the town of Dayton including the brewery,  a malt house, the first bank, a beautiful theatre, the first cement sidewalks, the paving of Main Street, the building of the Weinhard Building which housed his saloon and other commercial enterprises and the Weinhard Block which housed leased commercial spaces. The latter two are still standing along with his home which are all listed on the National Register of Historic Places. All three are architectural jewels of fine wood and woodworking.

In the area of community planning and development he was deeply interested in civic development often baring a greater portion of the cost of the project for the good of the community as in the case of the sidewalk land street paving projects.  His theater made great contributions to the cultural development of the community bringing to Dayton traveling road shows presenting works by Shakespeare, Ibsen and Sheridan, plus many home talent productions.

Jacob Weinhard married Caroline Giebenhain in San Francisco December 31, 1881. After which he returned to Dayton immediately.  Of their seven children they had three daughters and one son survive to adulthood. His son started a cattle ranch in Willowa, Oregon and had four daughters. The three girls stayed in Dayton with only one marrying after her father’s death and having no children. Jacob Weinhard died in 1941 in Dayton at the age of 91 and is buried to rest in the Dayton City Cemetery.